Home Trends Why Scrunchies Are So Popular Again 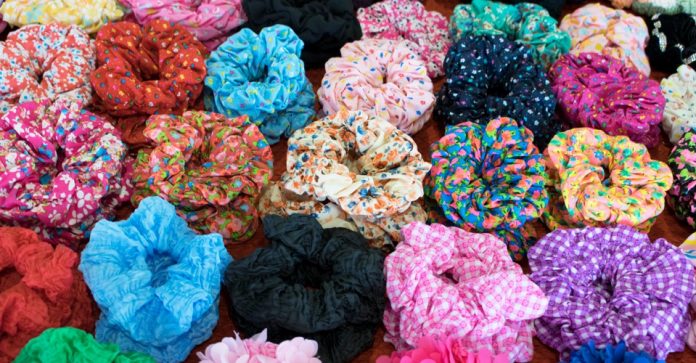 The scrunchie—a ring of elastic encased in loose fabric that forms a ruffle when twisted around a ponytail—was invented in the 1960s, but it wasn’t a thing until the Scunci brand launched in 1987. The brand’s hair ties fit in easily with the loose, colorful, casual look of the late ’80s and ’90s. For about a decade, the scrunchie was the default way Americans put their hair up.

Then the 2000s came, and everything got really tiny and tight, including hair ties. Nylon-wrapped black elastic cords became the norm. Any look will fade away after it hits critical mass, but the golden age of scrunchies had an unusually ignominious and decisive end: The style was the butt of a famous Sex and the City joke in the early 2000s that declared the scrunchie hair tie non grata for fashionable city-dwellers. Carrie Bradshaw found it hopelessly middle-American and middle-class.

The scrunchie was mostly relegated to the home, used to hold people’s hair in place while they slept or washed their faces. Now, those tiny, tight hair bands have been in favor even longer than their predecessors. Consumer restlessness is right on time, and the 1990s are the obvious choice for reconsideration, for reasons that run much deeper than hair accessories.

“We’ve reached that 20-plus-year marker that often ‘gilds’ a previous decade,” says Nancy Deihl, a fashion historian and a professor at New York University. “The hairstyles, the skirts, the earrings—it’s all looking fresh again.” Far beyond the apparel world, the careful combination of nostalgia and novelty is frequently what makes a particular product a hit with consumers.  Scrunchies fit that rubric perfectly. “When a style went away too recently, it’s because we had moved on,” Deihl explains. “But after a certain time things get revalued.”

Within hours of my personal scrunchie premonition, it became clear I hadn’t been the only one at New York Fashion Week nudged to revalue the stretchy, puffy hair accessories. Fashion publications like Vogue and Harper’s Bazaar devoted entire articles to Mansur Gavriel’s scrunchies, which were made of vintage fabrics and would be available only at the brand’s New York City boutique. (They’ve long since sold out.) Mansur Gavriel is owned and run by two cool, young New Yorkers who already had one viral megahit under their belt; the brand’s bucket bags had waiting lists that stretched for six months in the mid-2010s. The pair’s blessing is exactly what a nascent, marginal trend needs in order to make its way to a broader audience.

Not everyone loves the idea of the scrunchie’s return. For the past two decades, it has been maligned as big, frilly, and objectionably retro-looking. Its opponents don’t see any reason to change their views just because two hip designers decided the scrunchie is now cool. That attitude is typical of throwback fashion trends. While the nostalgic thrill is precisely the draw for some people, plenty of others who lived through bell-bottoms or baby-doll dresses the first time would love to leave those items in their past.